Care Counseling was announced today that it has been ranked No. 5 by the Minneapolis/St. Paul Business Journal at its Fast 50 Awards reception.

I am fascinated with self-development. I see it as an art in itself, and one that takes a lifetime of practice to master.

That said, here are 10 things you can do in your daily life to improve your personal development.

1. Read about what you want to improve.

Do you want to get better at a certain skill? Read about it. Be more meditative? Read books that explain that in detail. Want to be more productive? Spontaneous? Outgoing? Confident? All these topic areas are covered by books upon books that you can study–and by reading about it, it’ll always stay top of mind.

A mentor can be anyone from a peer who knows something you don’t, and you want to learn, all the way up to someone vastly more experienced who is willing to take you under their wing (in exchange for your working in some way for or with them). Mentorship is by far the fastest path of learning.

3. Reflect at the end of each day.

If you really want to take self-development seriously (and not just, you know, talk about it), you need to be constantly aware of how you can improve. And the only way to know how to improve is if you reflect and ask yourself where and how you still need some work.

It’s your habits that unfold the results, not the other way around. You can’t live one life and expect to one day have another. You have to put in place the daily habits that will allow the things you want to change to change.

5. Find others to push you and train with.

Self-development is not just a solo game. In fact, the best self-development is done with others in some capacity. Spend time with people who are working on similar things as you, and you’ll find yourself growing with them at a faster rate than if you had tried to do it all alone.

This is necessary for people who need to break bad habits. Sometimes, it’s a reward (or a punishment) that makes the difference between immediate and rapid change, and ongoing fleeting promises.

7. Stay honest with yourself.

No amount of talking about it will ever instigate true change. This is the hardest part for people. It’s far easier to buy a book on self-development, carry it around, and say, “I’m working on being more present,” while staying constantly on your phone to text your friends about how you’re trying to be more present. You have to really be honest about it with yourself. You are your own judge.

8. Find role models you can look up to.

Again, self-development is not easy, so it’s helpful to be able to look to others for inspiration, motivation, or even just daily reminders of how you can continue moving forward on your journey.

One of my mentors taught me, “If you can’t measure it, don’t do it.” Took me a long time to understand what that meant. Regardless of how ethereal the thing that you want to work on is, you have to find some way to measure your progress. It’s the only way you’ll really know if you are moving in the right direction–and when/where to pivot as you go along.

10. Consistency is the key.

Self-development doesn’t happen overnight. It happens slowly and deliberately. Consistency is what creates truly meaningful change–and this is what makes the process so difficult for people. It’s not that you pop and pill and you’re done. You don’t do it once and you’re “fixed.” Self-development is a daily practice and lifestyle.

Relationships and mental illness — can it work out? People who struggle with mental health issues might find themselves wondering if they can handle a relationship as well. I know I did. After all, it’s hard to think about being with another person when some days just managing life feels hard.

I didn’t date that much in my twenties. I was diagnosed with depression and anxiety at the age of 19, and I honestly thought that being in a relationship would be too much stress. I had all these worries — what if I wasn’t fun to be with? What if my partner got fed up with my issues and left? What if I wasn’t ready to deal with being in a relationship alongside dealing with my mental health?

And worst of all — what if I told someone about my mental health issues and they ran in the opposite direction? There’s such a stigma about mental health that I worried a lot about how my prospective partner might react.

I’m nearly 40 now and have been happily married for 15 years. Along the way, I’ve learned a few things about balancing a relationship together with mental health issues. Here’s what I’ve learned about relationships and mental illness.

Having a relationship is as possible for you as it is for anyone else! Whether we have mental health issues or not, each person comes with their own “stuff.” A mental health condition doesn’t have to be a barrier to a healthy relationship. Yes, it does take a bit of work, but it’s totally doable.

The key to having a good relationship is to find the right person. You’ll need someone who is open minded about mental health and empathic enough to be willing to learn and understand. Someone who shows patience when you are having a rough day.

Keeping your mental health a secret puts immense pressure on you, and that stress will only add to your problems and make your symptoms even worse. To have a successful relationship you need to know you can be open about your issues, even on your worst days.

Knowing when to disclose is a tough call. On one hand, you probably don’t want to mention it on the first date. It’s nothing to be ashamed of, but it is very personal. On the other hand, you don’t want to get really invested in the relationship only to find out they can’t handle it. I waited until it was obvious this was more than just a handful of dates, before we made any commitments

Your mental health condition most likely put some limits on what you can do in a day. For me, I know if I get too stressed, my anxiety gets worse. So I have to take things more slowly than some people. Stress might affect you in a completely different way, but be aware when it does.

Ultimately, only you are responsible for your behavior and for managing your mental health. It’s a good idea to make your partner aware of how your condition affects you and it’s absolutely ok to ask them for support — but don’t make them responsible for you. For example, sometimes my depression makes it hard for me to get motivated for a night out, but I don’t stop my husband from going out. My depression is not his problem to solve. 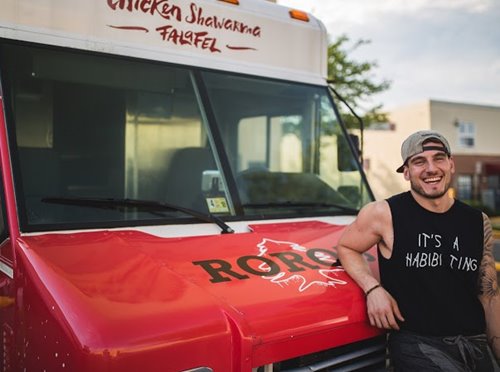 Never did someone stand over me as a kid and yell, “Let it out! It’s okay to cry! It’s human to hurt!” From my football coaches to my own father, it seems as though the social norm for men is to be some kind of impenetrable mountain of muscle that feels no pain and has no emotion. If we’re not hunting or fighting or eating a bloody, rare steak, then we’re not men. As a kid, I idolized the manly behemoths on TV. From Arnold Schwarzenegger to Dwayne “The Rock” Johnson, I wanted to be just like them. And I didn’t only want to mimic their physical appearance, but I wanted to be as happy and carefree as they seemed.

Our culture depicts men as heroes and symbols of strength and popularity, almost to the point of being invincible. Every little boy wants to be invincible. When my parents fought—yelling and breaking things in the house—all I wanted to be was invincible against how sad they made me feel. I wanted to be invincible against the feelings I had when that girl I had a crush on in 5th grade said, “No thanks, you’re too fat for me” after I finally worked up the courage to ask her to be my girlfriend; instead, I ran away and cried in the boy’s bathroom during second period. I wanted to be invincible when my youth football coach called me a “pussy” because I got hit and I said it hurt; instead, I questioned why feeling pain made me less of a man.

All these feelings, emotions and a twisted view of masculinity had a hold on me. Rather than accept and process my emotions, I learned to ignore and compartmentalize them. I kept my issues and pains to myself and tried my hardest to push them down as deep and far away from the surface as I could.

Then, the day came when the flood couldn’t be held back any longer and the levees broke. For so long I had hidden my pain, my confusion, my depression and I had become good at pretending to be “okay” with everything life was throwing at me. But one day it was not “okay” anymore. My mental illness had been ignored for so long and it would not be quieted any longer.

I couldn’t find any more strength or courage or fight just to keep those around me from finding out how bad I truly felt. I was so conditioned to “man up” that when the pain, sorrow and thoughts of suicide ran through my mind, I had no answer. I couldn’t yell or puff my chest at depression. Depression didn’t care how much I could lift or what car I drove or how many girls I had been with. Depression knew the real me. It knew the little boy who could never face his real problems head-on because the society in which he grew up wouldn’t let him. He was too busy pretending to be strong, too busy pretending to be a “man” to admit he lived with depression.

After my attempted suicide and rehabilitation, things started to become clearer. I learned that pain, sorrow, anger and sadness are a part of life—emotions don’t care if you are a man or woman or household pet. For the first time, I could accept and acknowledge my weaknesses and my pain. Finally, I found myself and have never felt stronger or more of a man.

Coming out about my depression was one of the most freeing and courageous things I have ever done. No longer am I silent or fearful about who I really am. I am comfortable and confident enough in myself to accept and face my demons. I’m no longer ashamed of my depression. And being self-aware and brave enough to face my emotions fills me with more manly strength and pride than any action hero ever did.

I can now step in front of my mental illness and accept it as a part of me, instead of always living in its shadow. And I’m here to tell you fellas to be bold and fearless about who you are. Be strong enough to admit your pains. Be courageous to acknowledge your struggles—regardless of how “un-manly” they may seem.

Depression affects 6 million men per year. So, next time you’re in the locker room talking, I hope that the conversation becomes deeper than football plays and girls. For being a man is what we men make it.

Rob “Roro” Asmar is a chef and restaurateur in the DC area. He passionately advocates for mental health through his volunteer and awareness raising efforts and seeks to break the stigma surrounding mental health & men. His open and positive attitude are expressed through his social media platform @RoroMeetsWorld where you can find his cooking and refreshing take on life.